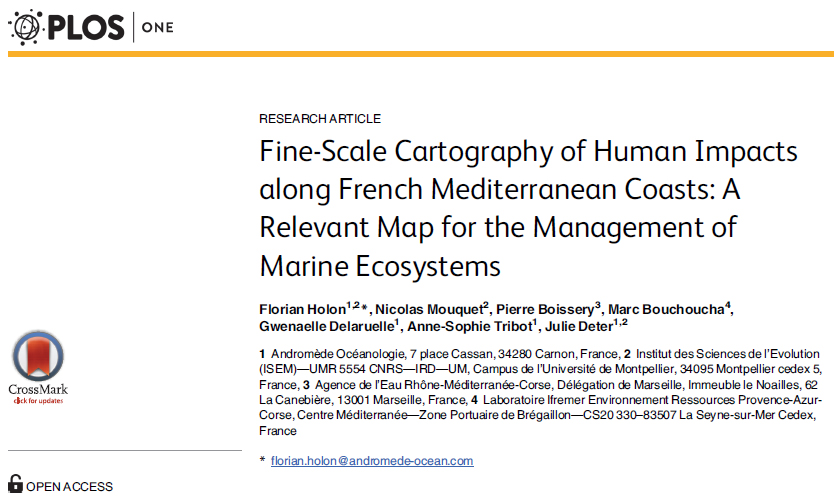 Fine-Scale Cartography of Human Impacts along French Mediterranean Coasts: A Relevant Map for the Management of Marine Ecosystems

résumé : Ecosystem services provided by oceans and seas support most human needs but are threatened by human activities. Despite existing maps illustrating human impacts on marine ecosystems, information remains either large-scale but rough and insufficient for stakeholders (1 km² grid, lack of data along the coast) or fine-scale but fragmentary and heterogeneous in methodology. The objectives of this study are to map and quantify the main pressures exerted on near-coast marine ecosystems, at a large spatial scale though in fine and relevant resolution for managers (one pixel = 20 x 20 m). It focuses on the French Mediterranean coast (1,700 km of coastline including Corsica) at a depth of 0 to 80 m. After completing and homogenizing data presently available under GIS on the bathymetry and anthropogenic pressures but also on the seabed nature and ecosystem vulnerability, we provide a fine modeling of the extent and impacts of 10 anthropogenic pressures on marine habitats. The considered pressures are man-made coastline, boat anchoring, aquaculture, urban effluents, industrial effluents, urbanization, agriculture, coastline erosion, coastal population and fishing. A 1:10 000 continuous habitat map is provided considering 11 habitat classes. The marine bottom is mostly covered by three habitats: infralittoral soft bottom, Posidonia oceanica meadows and circalittoral soft bottom. Around two thirds of the bottoms are found within medium and medium high cumulative impact categories. Seagrass meadows are the most impacted habitats. The most important pressures (in area and intensity) are urbanization, coastal population, coastal erosion and man-made coastline. We also identified areas in need of a special management interest. This work should contribute to prioritize environmental needs, as well as enhance the development of indicators for the assessment of the ecological status of coastal systems. It could also help better apply and coordinate management measures at a relevant scale for biodiversity conservation.