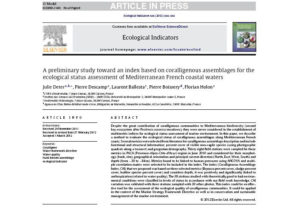 A preliminary study toward an index based on coralligenous assemblages for the ecological status assessment of Mediterranean French coastal waters
Julie Deter, Pierre Descamp, Laurent Ballesta, Pierre Boissery, Florian Holon
Abstract :
Despite the great contribution of coralligenous communities to Mediterranean biodiversity (second key-ecosystem after Posidonia oceanica meadows), they were never considered in the establishment of multimetric indices for ecological status assessment of marine environment.
In this paper, we describe a method to evaluate the ecological status of coralligenous assemblages along Mediterranean French coasts. Several metrics were selected from literature for coralligenous assemblage description and include functional and structural information: percent cover of visible non-vagile species (using photographic quadrats along a transect) and gorgonian demography.
Thirty eight field stations were sampled for these metrics in PACA (Provence-Alpes-Côte-d’Azur) region in June 2010 and considered for their morphology (bank, rim), geographical orientation and principal current direction (North, East, West, South) and depth (from −30 to −84 m).
Metrics found to be linked to human pressures using ANCOVA and multiple correlation matrix were selected to be included in the index. The index (Coralligenous Assemblage Index, CAI) that we proposed was based on three selected metrics (Bryozoa percent cover, sludge percent cover, builder species percent cover) and considers depth; it was positively and significantly linked to anthropization (related to water quality).
The 38 stations studied with theoretically good to bad environmental conditions were classified in levels of status in accordance with our field work knowledge. CAI variation was validated with three stations sampled with 30 other photos.
This index could be an effective tool for the assessment of the ecological quality of coralligenous communities. It could be applied in the context of the Marine Strategy Framework Directive as well as in conservation and sustainable management of the marine environment